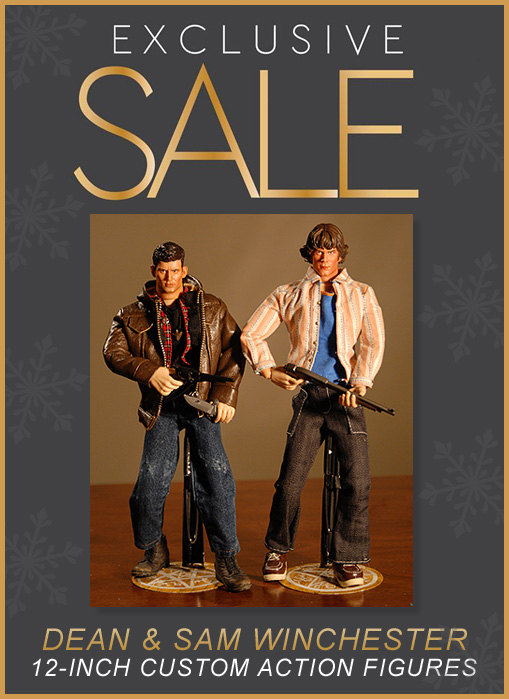 A few years ago dismayed by the lack of Supernatural Collectible Action Figures, I decided to make my very own Winchester brothers to keep on display in a glass case with other action figures and collectibles. Now for the first time ever, these custom 12-inch action figures can be yours! I need some spare room in my display case, and I have decided that it is time for Dean and Sam to move on to other appreciative fans.

Each Winchester is being sold separately with a portion of proceeds being donated to charities both Jensen Ackles and Jared Padalecki have supported in the past. They come with anti-demon possession tattoos, weapon, and stand complete with devil’s trap. *sold separately.

After receiving lots of great feedback and questions on Project Winchester, I've been thinking about making a new set of Dean & Sam Winchester 12' Figures and putting them up for auction. They probably won't be exact (mostly as far as clothes), but they will be just as authentic to their characters. Each Winchester will come with a custom painted stand, 1 weapon (shotgun, hand gun, knife, etc), and a anti-Demon possession tattoo on its chest. Dean will also come with his amulet given to him by Sam. Anything else included will be a surprise!

If anyone is interested in owning Dean and/or Sam Winchester 12' figs, sound off here. If there is enough interest, I'd love to make a new set to share. For more pictures see my prior post from 2010 here: http://erin-nikki.livejournal.com/2336.html Well...they are finally done! For anyone that has been following along, about a month ago I decided to set to work on making my own Dean and Sam Winchester action figures as for some reason after 5 years there are still no official figs. Being a collector of Whedonverse figs, and with Supernatural being my newest obsession since the Buffy days, I just had to give it a try. Being as this is my 1st attempt at making custom figs I decided the easiest way to go about it would be to make 12' (Ken Doll or G.I. Joe size) figures. This being the case, since I usually limit my collection to 6' figs, I decided to get a 12' Faith to go with them. From this day forth, my apartment/house will always be protected!

So without further ado....

dana_chosenart , that last row of pics was taken especially with you in mind since I know how much you LOVE Dean/Faith! Mwhahahahaha! <3

So basically, as well all know, I'm a big geek for Joss Whedon and his many awesomtastical shows. I would even say it borders on obsession, but hey who doesn't have one of those right? *g* I've probably spent into the hundreds on my collection of Buffy the Vampire Slayer, Angel, Firefly, and Dollhouse DVDs, books, and other memorabilia. But one of my favorite things to collect are the figurines, more precisely the 6' action figures (and not the ones with all those big, clunky, move-able joints, because those are lame). I've been collecting them for years, and keep them all in this nice glass china cabinet in my dinning room. They are always a conversation starter for any 1st timer at my place, and you find out very quickly how I feel about Joss Whedon.

click it
There are a couple other figurines I would like to add to the collection, in and outside of the Whedonverse. Some Lost figures might be nice, if I ever get around to buying some of those. I've been waiting for them to come out with Supernatural figures for 5 years now and they still haven't, and I've read there might not be much hope for it. All they have released are those busts that to me are not very good at all.

I've seen others make their own Buffyverse figures, so I've decided to do just that. Make my own custom Dean and Sam figures. I'm going to be making them as 12' figures (Ken or G.I.Joe size) just because that is the only size I can even conceive how to make. I've ordered the parts I need, the clothing, etc from ebay and am just waiting for it all to arrive so I can put them together. I also recently added the 12' sideshow Faith figure to my collection so she can stand beside Dean and Sam on their shelf in Ye Almighty Display Case. I've always liked the thought of a Buffy the Vampire Slayer & Supernatural Crossover, particularly Faith meeting the Winchesters, and Faith/Dean. Together they will forever protect my apartment!

While waiting for all my parts to get here (bad thing about ordering things online...the waiting!), I decided to prepare Ye Almighty Display Case for their arrival since it was looking rather dusty. Now it all seems so shiny, and the anticipation is only getting worse! I want my Dean and Sam figures! Faith is all lonely in there.

Click the thumbnails for pictures of the collection as of now...

I also went out today and got stands for Dean and Sam when they are finished. They were plain white, so I decided to give them a paint job. You probably won't be able to see much of it once the figures are in and their feet cover up most of it, but I gave them both wooden floors with Devil' Traps (design from Bobby's panic room) on the bases. I also painted the bars that will be behind their backs black so they would match Faith's stand. They still need a bit touching up. I made a mistake on the one Devil's trap, but like I said their feet will be covering it (can you tell which?). More pictures coming after Dean and Sam are finished.

Whad up! I am aware I tend to neglect this thing. I'm really more of a reader on here than an actual poster of things. :p Oh well...

New Layout up over at Dearly Devoted. The new layout is entitled "A Magical Journey" and features Willow from Buffy the Vampire Slayer. Using Tarot cards as the main focus it explores Willow's journey with Magick throughout the series to where I see her as she is now in present-day.

There are five (5) hidden easter eggs that can be found throughout Dearly Devoted, each providing you with more art, information, and fun! Find them all by scrolling over parts of the layout on different pages. Good luck!


Check it all out @ www.dearlydevoted.harbourlights.org

Feel free to use any of these wallpapers as your desktop. Please DO NOT hotlink, alter, repost, or claim any of the artwork found on this site without my permission. I'm a pretty easy going person, but I do like to know where my art is being displayed. I DO NOT want to see my art on FANPOP! CREDIT is a must! Comments are love!

Find different sizes and more art from me at:

Finally after more than a year, Dearly Devoted has a new layout! Since s2 of Dollhouse has started, and I began doing a rewatch of Buffy (on s3 now, Yay for Faith lovin'!), and planning on watching Angel and Firefly after, I decided to make this layout to honor some of Joss Whedon's warrior women from each of my fandoms. The new layout features Chrisma Carpenter (Cordelia) representing Angel, Eliza Dushku (Echo) representing Dollhouse, Gina Torres (Zoe) representing Firefly/Serenity, Felicia Day (Penny) representing Dr. Horrible's Sing-Along Blog, and Sarah Michelle Gellar (Buffy) representing Buffy the Vampire Slayer.

Check it out and tell me what you think!

P.S. - Thanks to Marilyne for my yummy new Fean icon! Mmmmmm!

After having to deal with some fanart theft on here, I decided I would put my boredom to use and make some anti-theft icons to use. So because I know it, and you know it, but THEY don't seem to know it...feel free to use these as well when dealing with thefts.

Its few and far between that I actually sit down and make icons these days. I just don't have the patience for such a small workspace anymore. :p So please don't mind the suckage.

To anyone not in the know, FANART THEFT is the cropping, editting, reposting, and/or claiming of another's work without their expressed permission. Most (if not all) fanart sites even have this plainly stated on their main pages.  Those of us in the fanart community work hard on our art, and it is an insult to us when doing any of the things mentioned above. Please respect the artist. Do not commit fanart theft. Or we will find you.

You have been informed.

After being diagnosed with pancreatic cancer a little more than a year ago, Patrick Swayze has passed away at the age of 57. He was a beautiful and talented man. He will not be forgotten.

My thoughts go out to his family and friends on this very sad night.

Feel free to use any of these wallpapers as your desktop. Please DO NOT hotlink, alter, repost, or claim any of the artwork found on this site without my permission. I'm a pretty easy going person, but I do like to know where my art is being displayed. I DO NOT want to see my art on FANPOP! CREDIT is a must! Comments are love!

Find different sizes and more art from me at: